The transition from ochre-coloured dolomitic marls to grey limestones indicates the base of the Upper Muschelkalk. In Southwest Germany this subgroup was also called Hauptmuschelkalk or Friedrichshall Limestone in the pioneer period of geology. Its regional facies differences are highly developed. The Upper Muschelkalk commences with the Trochitenkalk Formation, thickly bedded crinoidal limestones with the Spiriferina Bed indicating the upper boundary in Southwest Germany. This marker bed yields the latest mass occurrence of the crinoid Encrinus liliiformis. In Rhineland-Palatinate, the Trochitenkalk correlates with the dolomitic Schengen Formation. Upsection it is succeeded by the Tonplatten facies of the Meißner Formation, micritic limestones intercalated with marls and tempestitic shells beds. In central parts of Southwest Germany, the Meißner Formation may reach up to the Muschelkalk-Keuper boundary. Otherwise its upper boundary is already a few metres below the Cycloides Bed, upsection of which the facies is changing regionally. In the North German Basin clay- and marlstones of the Warburg Formation indicate sediment input from the North. In Rhineland-Palatinate and in the South of Baden-Württemberg, the dolomitic Irrel and Rottweil formations respectively were deposited in shallow marginal areas. Towards the basin margins, marine sandstones of the Gilsdorf Formation (Luxembourg) and the Eschenbach and Grafenwöhr formations indicate the nearby margin of the depositional area. Extremely thick-bedded shelly limestones of the Quaderkalk Formation were accumulated in shallow water above a submarine swell in Franconia. This Franconian Quaderkalk yields one of the most important Triassic building stones processed by several companies in a broad variety of products.

The lateral and vertical facies distribution indicates a transgressive-regressive cycle with the maximum flooding surface in the basin wide Tonplatten facies deposited in the spinosus and postspinosus ceratite biozones. This was the time of maximum dispersion of marine Muschelkalk faunas from the Paris Basin to Central Poland. Subsequently, ceratites and conodonts commenced an endemic development. In the central North German and Polish basins, crinoidal limestones (Trochitenkalk Formation) are lacking, and deposition of grey marlstones with bonebeds and plant debris started already in the spinosus biozone, however still with ceratites in Poland (Boruszowice Formation). 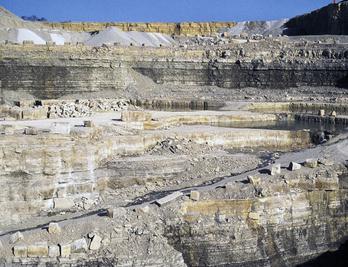 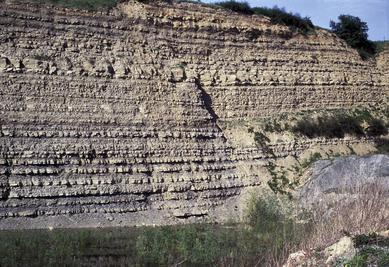 The Meißner Formation of decimetre-thick marlstone and limestone beds with intercalated tempestitic shellbeds (Tonplatten facies) was deposited below the fair-weather wave-base. Bivalves and ceratites are common fossils in this facies. Abandoned quarry near Dettelbach on River Main. 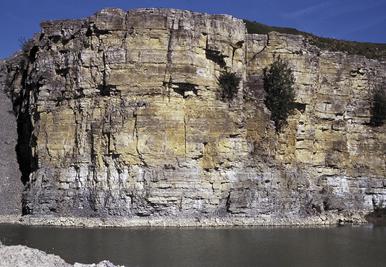 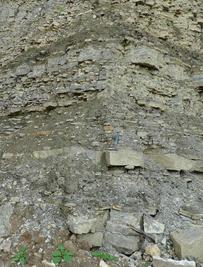 The Cycloides Bed is the most widespread Upper Muschelkalk marker bed. It is underlain and overlain by marlstone horizons, which indicate progressive prodeltaic continental sediment input from Northern Europe during low sea-level and humid climate. Abandoned quarry near Künzelsau-Garnberg (Baden-Württemberg). 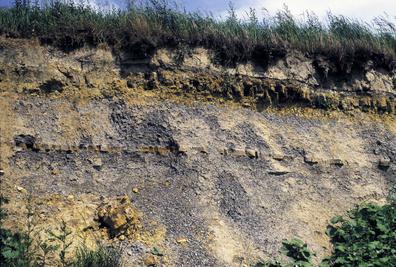 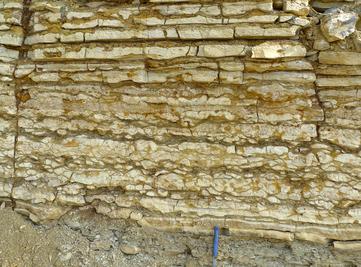 A section of the Upper Muschelkalk (nodosus biozone) with bioturbated limestones and intercalated shell beds that originated from ground touching storms. Such tempestite beds prove the frequent events of subtropical hurricanes entering the Muschelkalk Sea. At the base of the section, Tonsteinhorizont 6, one of the marker-bed claystone horizons. Berlichingen quarry (Baden-Württemberg).