The Muschelkalk, literally ‘bivalve limestone’, owes its name to the abundantly found bivalves. The term was coined as early as 1761 by the Thuringian naturalist Georg Christian Füchsel and is hence one of the earliest stratigraphic terms. The shapes of bivalve shells and their occurrence in certain sediment types provide a key to palaeontologists for reconstructing Triassic palaeoenvironments. Most of the Muschelkalk fossil communities dominated by bivalves can be specified according to the sedimentary environment in:

Comparably to extant burrowing bivalves, the Muschelkalk Sea was inhabited by plankton feeders which filtered their food actively, and detritus feeders, which collected food in the muddy substrate. Large scallop-like bivalves were flexibly attached or tightly cemented to shelly substrates. This applies to the oyster-like terquemiids which built small ‘bioherms’, reef-like structures that allowed a variety of other organisms to anchor on the sea floor. Most of these bivalves have calcitic shell layers and are generally better preserved than burrowing species with aragonitic shells, which are preserved as internal moulds unless the aragonite was secondarily altered to calcite. 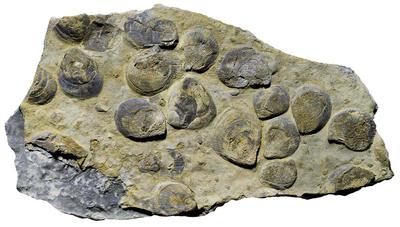 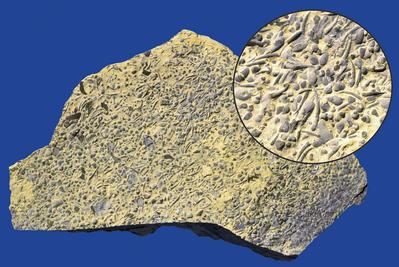 Shallow burrowing clams and scaphopods (‘elephant teeth’) were excavated by ground-touching storms and subsequently embedded by currents into stable convex-up or longitudinal positions. Such shell beds are called ‘Muschelpflaster‘, which means ‘shell pavement’. 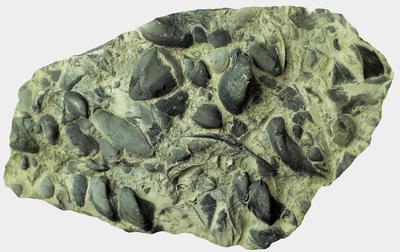 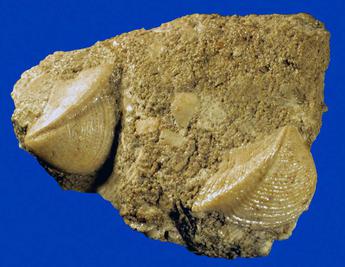 Only when preserved as a secondarily calcified ‘Ersatzschale‘, or as an external mould, the myophoriid Elegantinia elegans displays its outer shell ornamentation. The picture shows a right and a left valve from the oolitic ‘Astartebank’ of the Willebadessen Member (Trochitenkalk Formation). 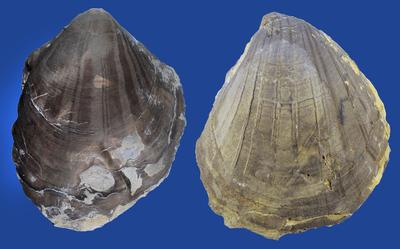 The scallop Pleuronectites laevigatus is type species of the Family Pleuronectitidae. The calcitic shells have commonly preserved their original reddish color bands. Under diagenetic pressure solution, the pigmented stripes are less easily soluble than unpigmented areas and are hence altered into a pseudo sculpture. 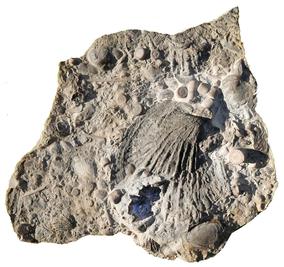 The large Newaagia noetlingi is a false oyster belonging to the family Prospondylidae. Cementing their right valves to solid substrates, these bivalves contributed to the frames of ‘oyster’ and crinoid bioherms in the Trochitenkalk Formation 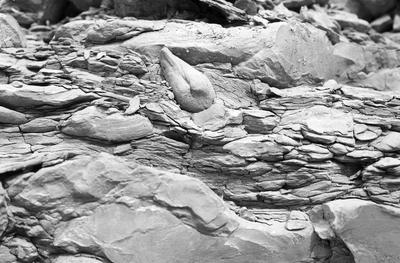 Pleuromya was burrowing deeply within soft sediment and only its long sipho tubes reached up to the sediment-water interface. Pleuromya is commonly found in life position with the posterior end directed upward as a double valve internal mould. 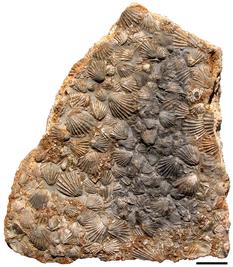 The original nacreous shells of the costate myophoriid Costatoria goldfussi, a common Lower Keuper fossil, were converted into calcite and are preserved as ‘Ersatzschalen’, replacement shells. 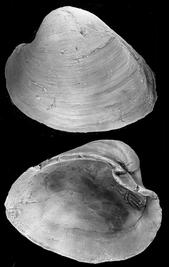 Unionites donacinus was a common clam in brackish water environments of the Lower Keuper. However, it is generally preserved as an internal mould. Individuals with shells replaced by calcite show the hinges, which are diagnostic for the position in the biological system of Bivalvia. 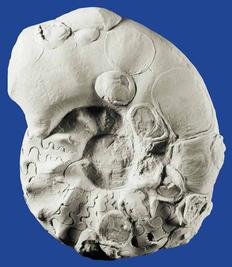 The larvae of the small oyster-like bivalve Placunopsis settled on all sorts of solid substrates, e.g. ceratite shells. After the bivalve´s death, the free valve fell down and the cemented valve remained, thus forming small reef-like bioherms constructed by thousands of stacked Placunopsis individuals. The picture shows a steinkern of Ceratites robustus, which was incrusted by Placunopsis when it was still alive. 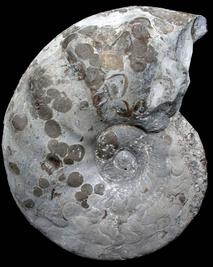 Internal moulds of ceratites that are incrusted by Placunopsis like the Discoceratites alticella figured, occasionally display external and internal incrustation of the body chamber. This is a clear evidence of post-mortal incrustation. After the dissolution of the ceratite shell, the smooth attachment area of the bivalve becomes visible. 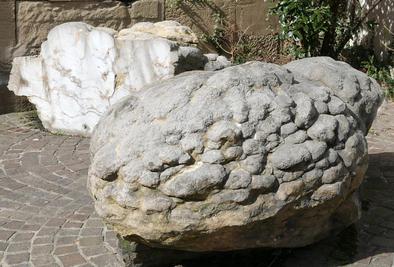 During phases of long-lasting sedimentation interruption, Placunopsis was able to build meter-thick bioherms resembling stromatolites. These Placunopsis reefs are widespread in the ‘Hauptterebratelbank‘ of the Upper Muschelkalk of Franconia and Lorraine (France). Such a bioherm is displayed in front of the Muschelkalk Museum.