Only one group of crinoids likely survived the end-Permian extinction and gave rise to all post-Palaeozoic and hence to all living crinoids. Closely related with these ancestral crinoids are the Holocrinidae, from which the extant Isocrinidae and the feather stars descended. Holocrinid remains are found in the Early Triassic of many parts of the world. Whereas the stalked Crinoidea withdrew from shallow marine environments to the deep sea since the Cretaceous Period, the stalkless and actively swimming feather stars preferentially inhabit reef biota.

As early as 1546, columnals of the Muschelkalk sea lily Encrinus liliiformis were described by Georgius Agricola and called ‘Trochites’ because of their wheel-like shape. Prior to this, in popular superstition they were interpreted as sun wheels, witches money, or St. Boniface’s pennies. Only in 1719, the Hamburg physician Michael Reinhold Rosinus recognised the relation of the ‘stone lily‘ to asteroids. Until the first living ’sea palm’, dredged from Caribbean waters, arrived at the Natural History Museum of Paris, it took additional decades.

The up to 150 cm long column enabled Encrinus liliiformis to lift its crown with 10 arms above the seafloor for filtering food from the plankton-rich currents by means of its delicate pinnules. Disc-shaped holdfasts anchored the animals tightly to hard grounds or oyster beds, which formed small reef-like islands dispersed over the muddy seafloor. These ’bioherms‘ provided solid anchoring grounds to countless organisms. Classic fossil sites are the valley of River Jagst near Crailsheim or the Elm Hill near Brunswick. Crinoid columnals and other ossicles accumulated there in metre-thick beds of the Trochitenkalk Formation.

The Muschelkalk Sea was inhabited by additional crinoid genera and species, among which Carnallicrinus and Chelocrinus have 20 arms. The small Dadocrinus is restricted to the eastern parts of the Muschelkalk Sea. Other than the Encrinida, which were permanently attached by holdfasts, appendages of the column called cirri enabled Holocrinus to actively cling to objects, to loose, and to re-attach elsewhere. 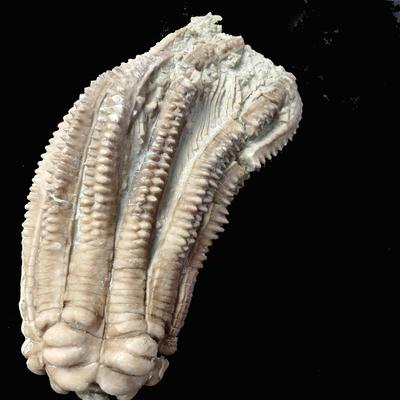 Crown and growth zone of the column of Encrinus liliiformis. To each of the biserial brachials of the arms, a pinnule was attached. When the animal spread its arms to a fan, plankton was passively filtered from out of the nutrient current. 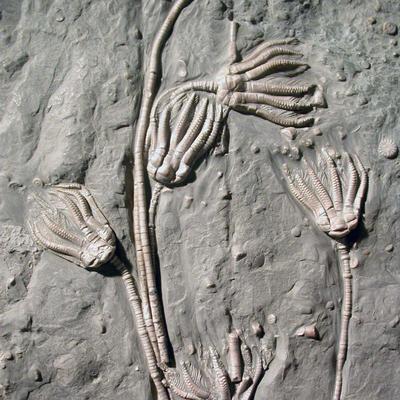 Encrinus liliiformis lived associated in clusters and attached to the reef-like bivalve and crinoid bioherms, which were constructed by false Muschelkalk oysters and crusts of crinoids roots. During storms, bunches of uprooted crinoids were embedded in the flanks of the bioherms. 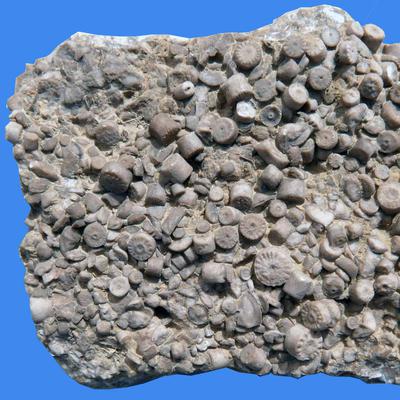 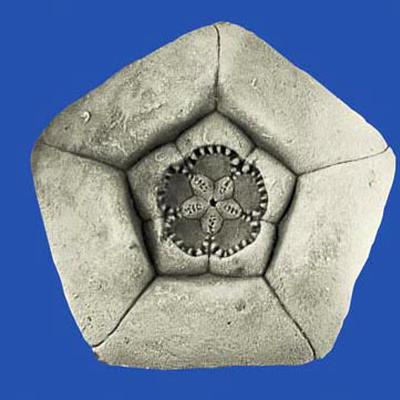 The pentagonal cup of Encrinus liliiformis is formed by three plate circles, which enclose the stem pit. New columnals were continuously generated in the stem pit and were thus shifted downward while the column was growing. 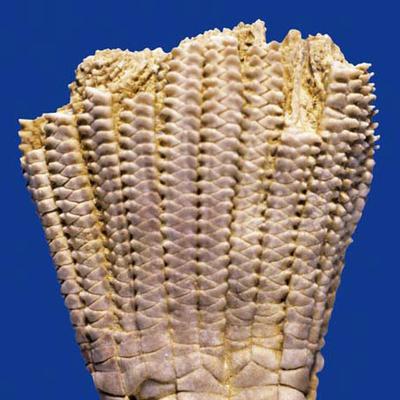 Some individuals of Chelocrinus schlotheimi from the basal Trochitenkalk Formation in northwestern Germany preserve remains of their original purplish or violet colour pigments, the ‘fringelite‘. 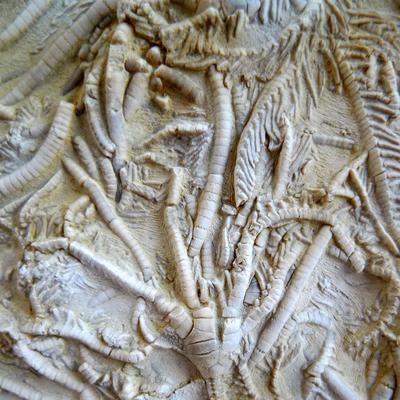 Dadocrinus is well known from the earliest Muschelkalk beds in Silesia and from contemporaneous Muschelkalk sediments of the Tethyan Triassic. During this time, in the western part of the Central European Basin red claystones of Upper Buntsandstein were still deposited. 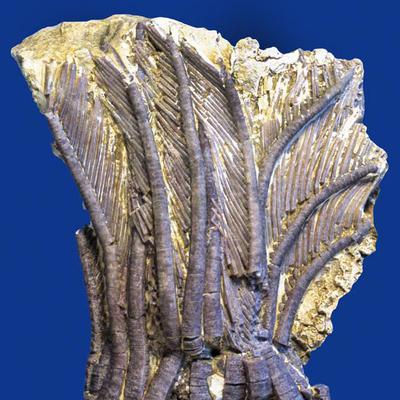 Carnallicrinus carnalli with 20 arms has recently been assigned to family Dadocrinidae. Rich historical finds come from Lower Muschelkalk Schaumkalk quarries in the vicinity of Freyburg on River Unstrut in Central Germany. Many specimens have their original colour pigments preserved. 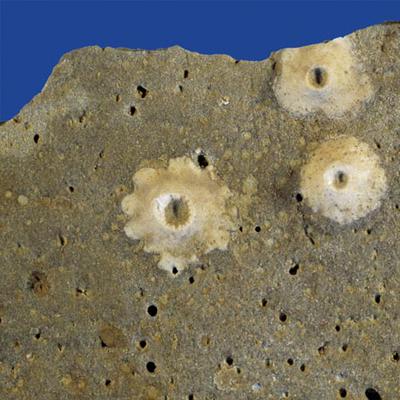 Carnallicrinus was attached by discoid holdfasts on top of a hard ground, which was intensively bored by unknown organisms that produced the boring trace Trypanites in Schaumkalkbank 2 of Gutendorf near Weimar. 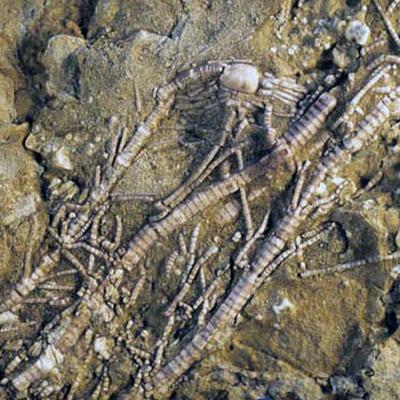 Holocrinus has a pentagonal column with ‘nodal’ columnals, to which five motile cirri were attached that fixed the animal to the seafloor. Holocrinus columnals are frequently found in several Lower Muschelkalk beds, but articulated individuals like those illustrated from Rüdersdorf near Berlin are sought-after rarities. The stub arms on top of the barrel-shaped cup are regenerating after autotomy. 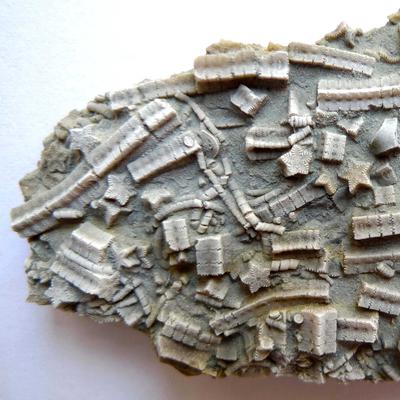 The pentagonal columnals of Holocrinus dubius are concentrated on some Lower Muschelkalk bedding planes. The post-mortal decay of Holocrinus columns into segments of mostly seven columnals followed preformed rupture points. The small elliptical ossicles are cirrals, derived from the disarticulated cirri. 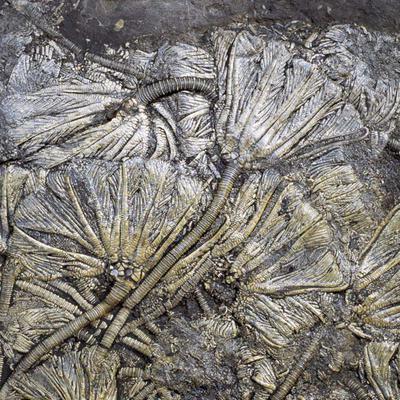 Traumatocrinus from early Upper Triassic black shales of South China is a multi-arm offshoot of Encrinidae, which was distributed over the entire Tethys. Other than its Middle Triassic ancestors it was not fixed to the seafloor but to drift wood. Its larvae attached to big logs drifted all over the Tethys and grew up to huge animals with columns of more than 15 m length. The Muschelkalk Museum holds a well sorted collection of this crinoid. 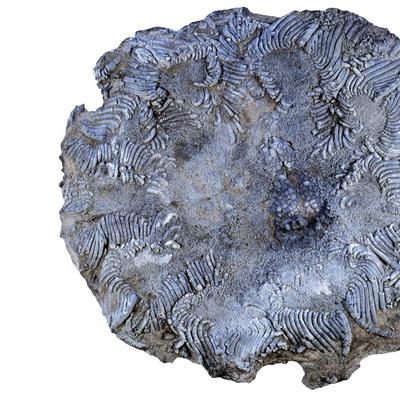