During history of life on earth almost all animal phyla managed to step on the solid land. This does not apply to the echinoderms, which, however, inhabit all marine habitats from coral reefs to abyssal depths. Most echinoderms have a pentamerous symmetrical internal skeleton composed of porous ossicles, which are held together by muscles and connective tissue. Their hydraulic system supplies oxygene and keeps the animals mobile by countless tiny tube feet. Echinoderms have existed since Early Palaeozoic times, that is half a billion of years. However, before the end of the Permian, some previously diverse echinoderm classes were extinct. It is only the sea lilies (crinoids), the starfish (asteroids), brittle stars (ophiuroids), sea urchins (echinoids), and sea cucumbers (holothurians) that survived the most severe crisis of life on earth at the end of the Palaeozoic. Since Triassic times, the Echinodermata have recovered and diversified. Among these, the echinoids, asteroids, ophiuroids, and holothurians were most successful, while crinoids never reached their earlier diversity. 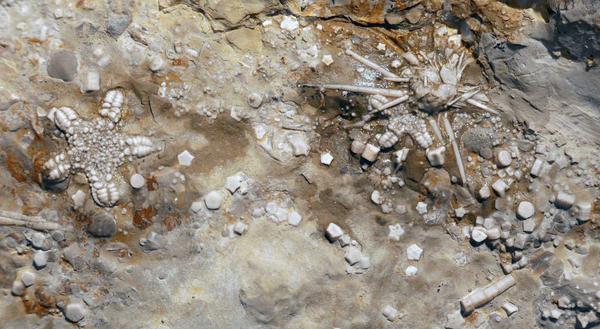 The seafloor in the Lower Muschelkalk Sea was stirred up during a subtropical storm. When the mud was settling after the tempest, the starfish Trichasteropsis bielertorum, the sea urchin Serpianotiaris coaeva, and remains of the crinoid Holocrinus dubius were perfectly conservated. The large slab, which preserved a snapshot of the former seafloor, was found in Lower Saxony.