In the staircase of the museum the historical Ingelfingen deep borehole is staged. On search of black coal the boring was sunken between 1857 and 1863 to a depth of 815 m. However, no coal was found but information about the subsurface geological strata. Below the almost 400 m thick claystones and sandstones of the Buntsandstein, Upper Permian limestones and dolomites were discovered, deposited at the southern margin of the Zechstein Sea. These are underlain by Lower Permian Rotliegend and earlier Palaeozoic folded slates of the basement. For many years, the drill hole yielded a highly concentrated brine, the ‘Badbrunnen’. In the 1960s, the Ingelfingen Township attempted to become a spa and organized additional borings. 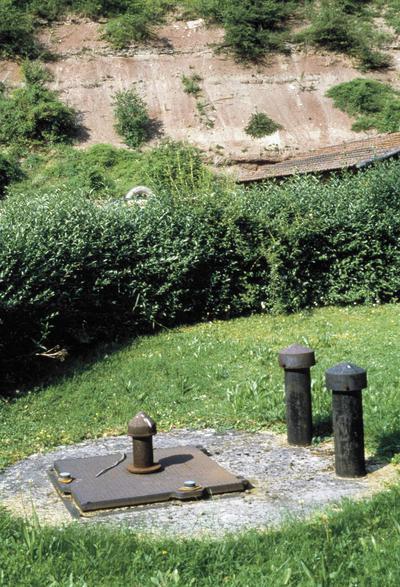 The ‘Badbrunnen’ next to the Ingelfingen graveyard where the deep well was drilled. In the background red claystones of the Upper Buntsandstein Rötton Formation

Geological column of the Ingelfingen deep borehole. From Simon and Hagdorn 1985