The Middle Muschelkalk is characterised by evaporitic sediments that precipitated under subtropical climate from hypersalinar seawater when the water exchange between Tethys and Muschelkalk sea was restricted. Over the entire Central European basin the Middle Muschelkalk commences with the dolomitic and marly Karlstadt Formation, which was deposited under restricted shallow marine conditions. It still contains a low diversity bivalve fauna, stromatolites and vertebrates. Subsequent increasing evaporation caused the deposition of anhydrite and gypsum, then of rocksalt, the thickness of which reached up to 40 m in the Heilbronn area, and again of anhydrite. These almost unfossiliferous deposits are comprised as Heilbronn Formation. This unit is overlain by the dolomitic marls of the Diemel Formation, deposited under conditions that allowed immigration of salt-tolerant floral and faunal elements. Along the western margin of the basin, reddish claystones are intercalated (Ralingen Formation). In South Poland, the lower unit of the Middle Muschelkalk (Diplopora Dolomite Formation) still yields marine invertebrates and calcareous algae (Dasycladales). In regions where the readily soluble evaporitic sediments of the Middle Muschelkalk lie close under the surface, they were dissolved subterraneously and their thickness was strongly reduced. The Middle Muschelkalk rocksalt yields important raw materials for the chemical industry and road and table salt. 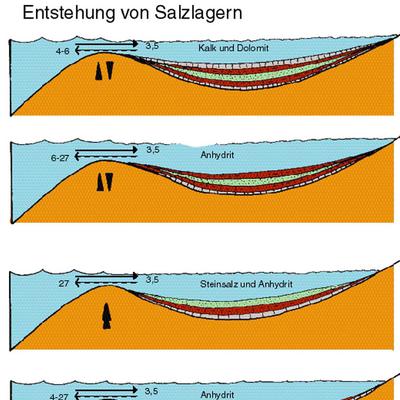 Development of rocksalt deposits according to the Ochsenius Theory. Under subtropical dry climate seawater evaporates in an enclosed basin. Backflow of the concentrated brine to the open sea was restricted by a swell while light sea water continuously entered the basin. In a symmetrical salinar cycle, dolomite, anhydrite, and rocksalt were deposited. Salt content during inflow and backflow in percent. According to Wagner 1960, from Hagdorn 2005 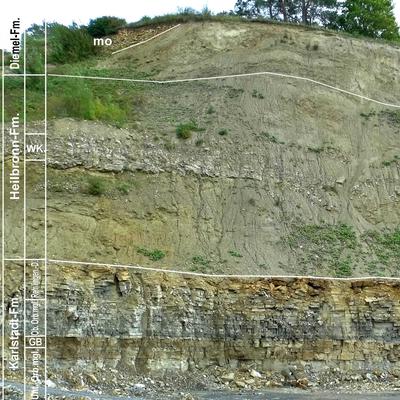 The Middle Muschelkalk at Werbach on River Tauber (northern Baden-Württemberg). The readily soluble evaporates, rocksalt and gypsum, in the Heilbronn Formation are subterraneously dissolved (subrosion) and only insoluble fractions of the formation are preserved. 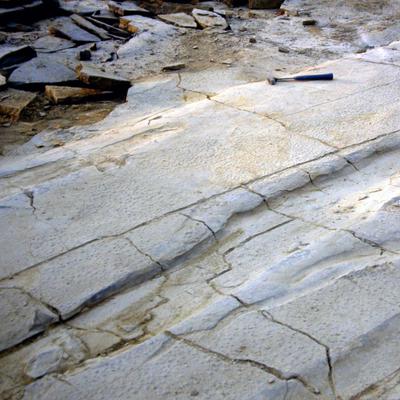 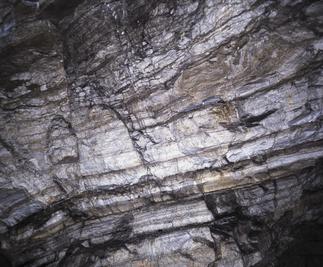 Underneath the town of Forchtenberg on River Kocher (Baden-Württemberg), the Heilbronn Formation gypsum beds are still preserved. In the 16th century, the Forchtenberg artist Leonhard Kern and other members of his famous family used the raw material alabaster for fine pieces of art that were treasured by European aristocrats.

Stromatolites are finely laminated bacterial mats that originate in hostile environments of salt lagoons. The stromatolite covering a chert lens has been found in the Diemel Formation near Jena (Thuringia). 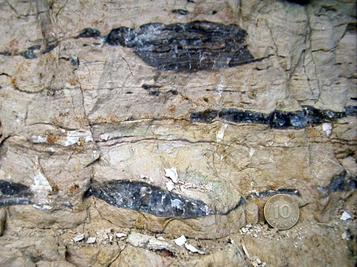 Along the boundary between Middle and Upper Muschelkalk chert lenses or bands commonly occur. The silica was provided by sponges, the spicules of which are sometimes still preserved in the cherts. Black chert band at the lithostratigraphic boundary in the Wutach Gorge, southern Black Forest