River Kocher, a tributary of River Neckar has deeply incised into the Triassic rocks of the Southwest-German cuesta landscape – at Ingelfingen up to 200 meters. The morphology of the valley reflects the change of the subsequent rocks. The wide valley floodplain has been deepened into the easily erodible claystones of the Upper Buntsandstein, the Rötton Formation. The lower part of the slopes is shaped by the hard and resistant Lower Muschelkalk limestones formig steep flanks and locally even cliffs, the upsection evaporites of the readily soluble Middle Muschelkalk rock salt and gypsum produce a flat shoulder, and then again steeper slopes in the hard Upper Muschelkalk limestones. This sequence is overlain by Lower Keuper marls and sandstones of the Hohenlohe Plains. The thickly bedded Upper Muschelkalk limestones have been picked up by wine farmers through centuries and piled up to so called ‘Steinriegel’, which were said to improve the microclimate in the vineyards. The gravels in the valley floodplain are covered by sandy clays which were deposited since the High Middle Ages when the woodland in the nearby Keuper hills was cleared and denudation increased. On display is a peel of the gravel and clay layers of these geologically youngest sediments completed by subfossil gastropod and bivalves that inhabited River Kocher. The Mammoth tusk was recovered in a loess pit of the Hohenlohe Plains. 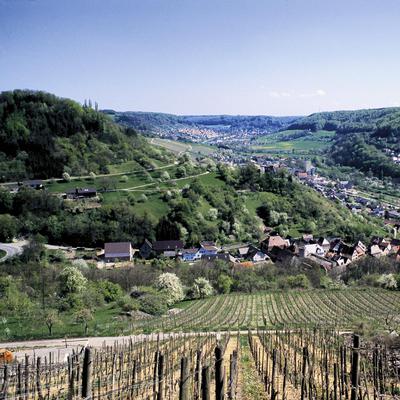 The panorama view towards the medieval ruin of ‚Lichteneck‘ on top of the Lower Muschelkalk terrace clearly shows the tripartite profile of a typical Muschelkalk valley. 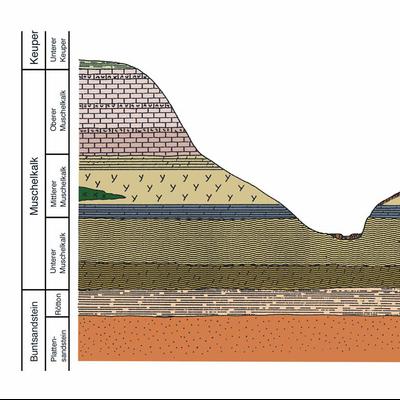 Geological section of Kocher Valley with the Triassic units of Buntsandstein, Muschelkalk, and Keuper. The Middle Muschelkalk rocksalt and gypsum beds have been almost completely dissolved. From Hagdorn (2004) 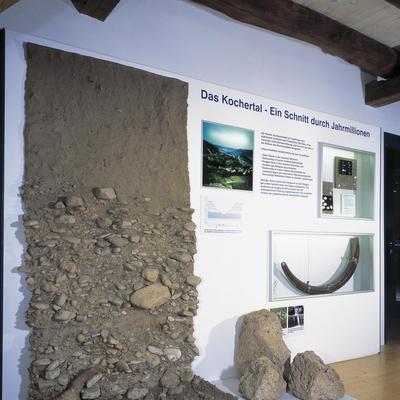 Unconsolidated rocks of the valley floodplain: The poorly abraded Muschelkalk gravels are overlain by sandy floodplain marls, which have been deposited since the mediaeval clearing of the Keuper woodlands. Photo: B. Lattner 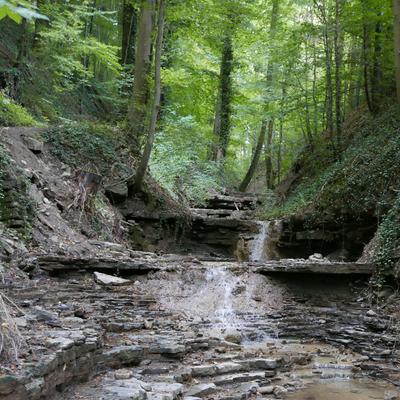 During extreme rainfalls the gorges, in dialect the ‘Klingen‘, between the elevated plain and the receiving stream are heavily eroded. At thick Muschelkalk beds, horseshoe-shaped waterfalls are formed, and underneath the less resisting marly beds are scoured. The picture shows the Honig- Klinge in Schöntal on River Jagst. 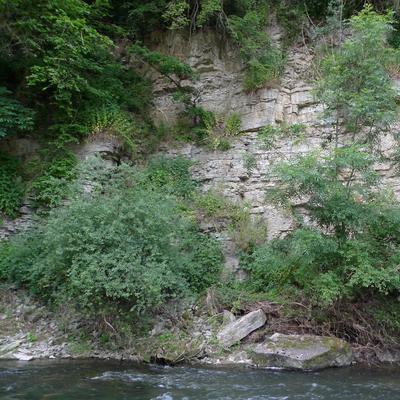 The thick and massive Upper Muschelkalk beds build steep cliffs at places of maximum side erosion of the river. Fallen rocks are too big to be washed away. In the Franconian dialect, such scarp faces are called ‘Kleb‘. The photo was taken near Sulzdorf and shows a ‘Kleb‘ of River Bühler, a tributary of River Kocher. 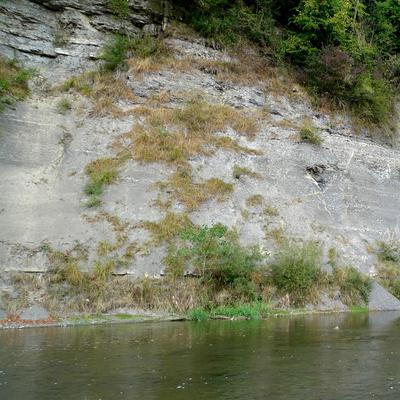 The ‘Kleb‘ at River Kocher near Braunsbach is not less steep. However, here the river erodes the less resistant dolomitic marls of the Lower Muschelkalk Freudenstadt Formation, which are washed away by flood waters.

Cröffelbacher Klinge near Braunsbach after the devastating flash flood of 29 May 2016. Panorama Magnus Hagdorn