The up to 120 m thick Lower Muschelkalk was also called Wellenkalk or Wellengebirge because of the dominating thinly and wavy bedded marly limestones. This is the typical sedimentary rock of the basin wide distributed Jena Formation, which is subdivided by three characteristic markerbed groups, the Oolite Beds, the Terebratula Beds, and the Schaumkalk Beds (foamy limestone). In Southwest Germany the Wellenkalk facies is gradually passing into the dolomitic and clay-dominated Freudenstadt Formation, further towards the southwestern basin margin (Eifel, Palatinate, Alsace) into marine sandstones of the Udelfangen Formation, towards the southeastern margin (Bavarian Palatinate) the Eschenbach Formation. Along the extreme southeastern margin of the basin, the terrestrial Grafenwöhr Formation covers the entire Triassic and possibly also Permian rocks. In Brandenburg the Wellenkalk facies in the upper part of the Lower Muschelkalk is replaced by 70 m of thickly bedded oolitic and shelly limestones of the Rüdersdorf Formation. From the Netherlands towards the North Sea intertidal carbonatic limestones with mudcracks indicate temporal dry-falling (Vossenveld Formation). In southern Poland, the Lower Muschelkalk comprises the Gogolin, Gorazdze, Terebratula, and Karchowice formations, the faunas of which are strongly influenced by Tethyan faunas.

The transgression of the Muschelkalk Sea proceded during some 10,000 up to 100,000 years from Southeast to West. While in Upper Silesia already marine limestones with crinoids (Lower Gogolin Formation) were deposited, Southwest Germany was still dominated by terrestrial sandstones and claystones of the Upper Buntsandstein (Plattensandstein and Rötton formations). 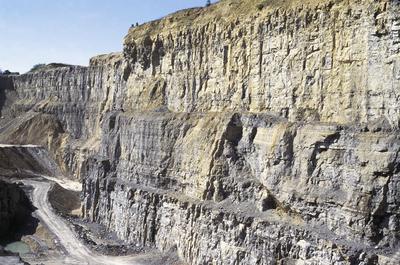 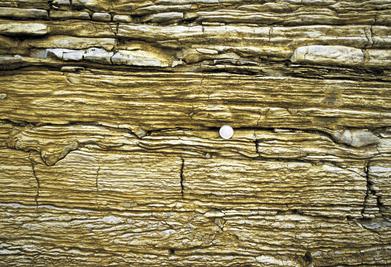 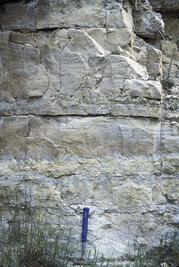 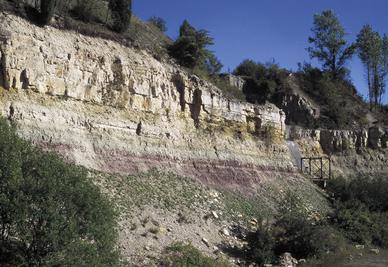 In Germany the Buntsandstein-Muschelkalk boundary is defined at the transition from reddish and greyish claystones to ochre-colored marine limestones, the Grenzgelbkalk (Yellow Boundary Limestone). In an abandoned quarry near Hammelburg (Franconia) this important boundary is exposed. Due to the advancing transgression from East to West, the Muschelkalk base is defined at a deeper level in Poland. 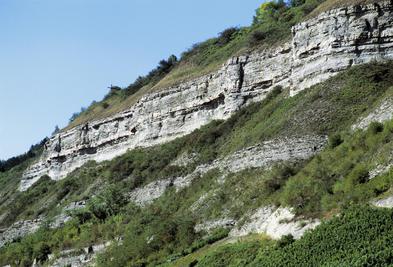 In the valleys of the rivers Saale or Main the thick Jena Formation marker beds form cliffs that provide habitats for thermophilic plants and animals. The photo shows the Schaumkalkbank cliffs along river Main near Karlstadt downstream of Würzburg (Franconia). 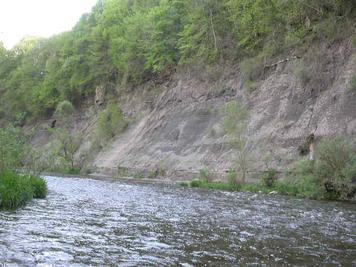 In the lower part of the Lower Muschelkalk dolomitic marlstones dominate the Freudenstadt Formation. Near Braunsbach, the River Kocher erodes these dolomitic marls and forms a steep cliff.